As an Amazon Associate I earn from qualifying purchases made using the “Buy” button at the bottom of this post. Where possible, you’ll be redirected to your nearest store. Further information on supporting our work.

2560 x 1440 models with a 240Hz+ refresh rate garner wide interest For PC gamers able to push high frame rates with their systems. As well as those using their systems for more than just gaming. The AOC AG274QGM offers this, with refresh rate pushed up to 300Hz and a focus on strong HDR performance. This member of the AGON PRO series features the usual styling, with black and red colour scheme, coated-metal stand base and detachable ‘shadow shield’ shading hood to help reduce glare. The top and side bezels are dual-stage, with a slim panel border flush with the rest of the screen plus a slender hard plastic outer component. The bottom bezel has customisable ‘Light FX’ LED lighting on the underside, whilst an LED light projector is included which projects one of two logo designs onto the desk. The colour and flashing or cycling behaviour (if desired) of both features can be customised in the OSD (On Screen Display). The OSD is controlled by a joystick at the rear, towards the right side as viewed from the front.

A 27″ 2560 x 1440 (WQHD or 1440p) IGZO IPS-type panel is employed, likely an AUO AHVA panel more specifically. A matte anti-glare screen surface is employed, whilst 1000:1 static contrast and 178° horizontal and vertical viewing angles are specified. The monitor supports a 300Hz refresh rate, with a G-SYNC module providing a ‘full fat’ G-SYNC experience. Based on what we’ve seen with other G-SYNC Ultimate models, the module may also be accessible by AMD GPUs via DP using Adaptive-Sync (FreeSync support). A flicker-free Mini LED backlight with 576 dimming zones (FALD) is included, with an expected gamut of 95%+ DCI-P3. The monitor is a G-SYNC Ultimate model with focus on a dynamic HDR experience. It supports VESA DisplayHDR 1000, with a peak luminance of 1000 cd/m²+ alongside the contrast advantages of the individually addressable zones of the backlight. 10-bit colour is also supported, whilst the colour gamut can be put to good use. A 1ms grey to grey response time is specified, which should be approached with caution. As usual for a G-SYNC model, there will also be a focus on minimising latency as much as possible. Reflex Latency Analyser compatibility is included, allowing overall system latency to be measured if you have a compatible mouse (and Nvidia GPU) as well.

The monitor is sub-branded by Nvidia as a ‘G-SYNC Esports’ model, with some additional features including ‘Dual-Format’ which simulates a 25″ Full HD experience. Based on other models with the design we suspect the red elements at the rear are actually customisable ‘Light FX’ RGB lighting. We’d expect full adjustability of the stand, with a central attachment and quick-release mechanism included. Removing the included stand reveals 100 x 100mm VESA holes for alternative mounting. A flip-down headphone hook is included at the left side (as viewed from the front), with a cable-tidy system at the rear of the stand neck. The ports face downwards and are yet to be officially confirmed. Based on available information they appear to include; DC power input (external ‘power brick’), 2 HDMI 2.0 ports, DP 1.4, a 3.5mm headphone jack and 4 USB 3.2 ports (plus upstream). One of the USB ports will be green-coloured and is exclusively designed for connection to a Reflex compatible mouse. 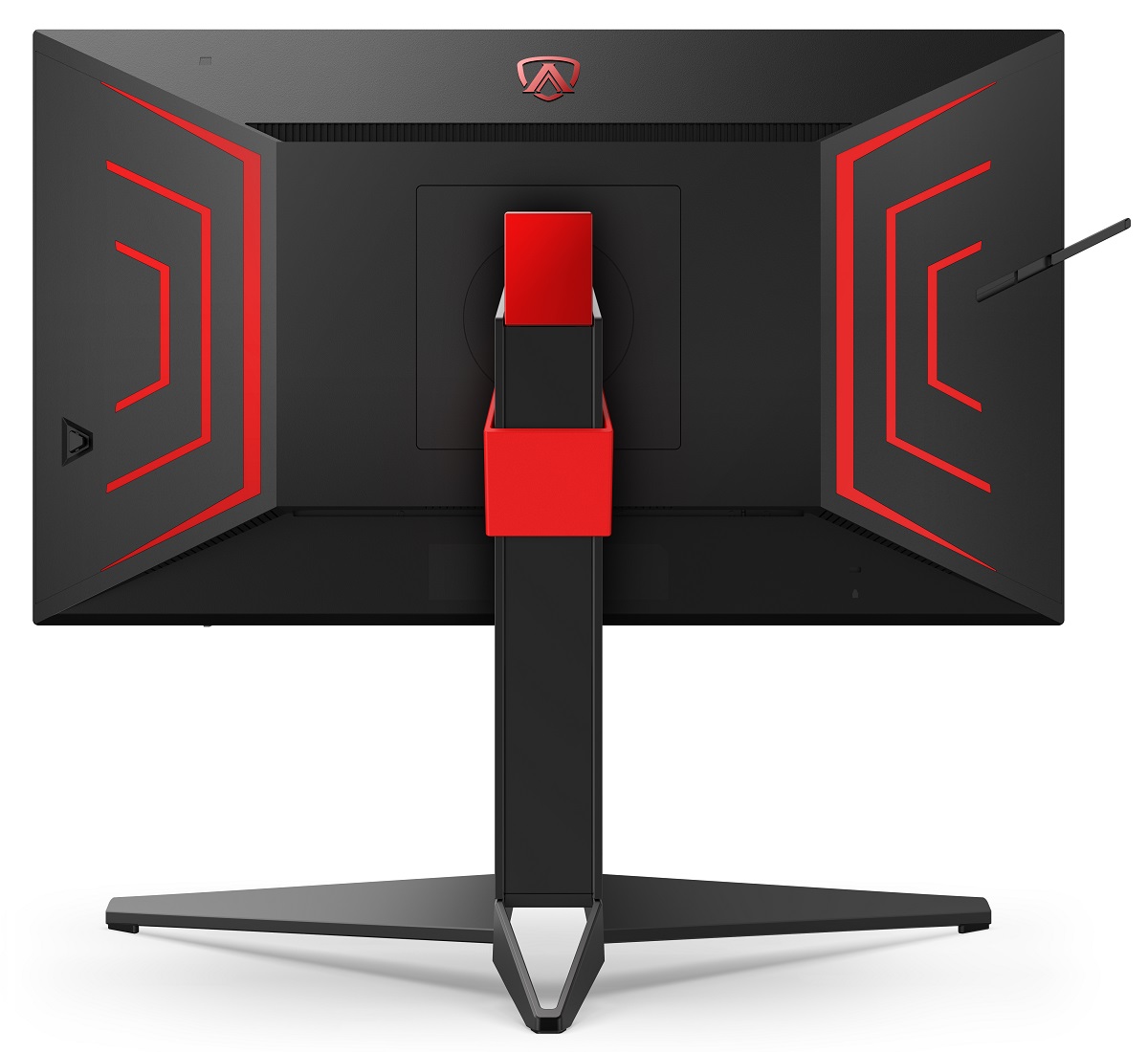 Further details can be found in this press release. Details on price and availability still to come.