Celebrities, famous athletes, musicians, and artists have all used live streaming platforms like Facebook Gaming, Twitch, and YouTube Gaming to connect with their communities at a time when real human interaction was extremely limited.

As a result, streaming platforms have continued to set new records each quarter. In fact, for the third quarter in a row, Twitch just broke its record for the number of hours streamed. However, as lockdown restrictions begin to loosen, the question we are asking ourselves is what effect will this have on the streaming industry?

This report will examine the most recent industry data and trends from the major streaming platforms to help answer that question. Thank you to Stream Hatchet, the industry leader in game-streaming analytics, for providing the data that aided in developing these insights.

Following Twitch’s meteoric rise in viewership this time last year, it’s encouraging to see the platform retain those viewers and break new viewership records in Q2. However, the rate of growth is beginning to slow.

While the slowing growth is most likely due to people resuming their normal lives, working in offices, and going out more frequently, the fact that Twitch is still breaking records is a good sign that they are retaining new viewers who began watching Twitch during the pandemic. 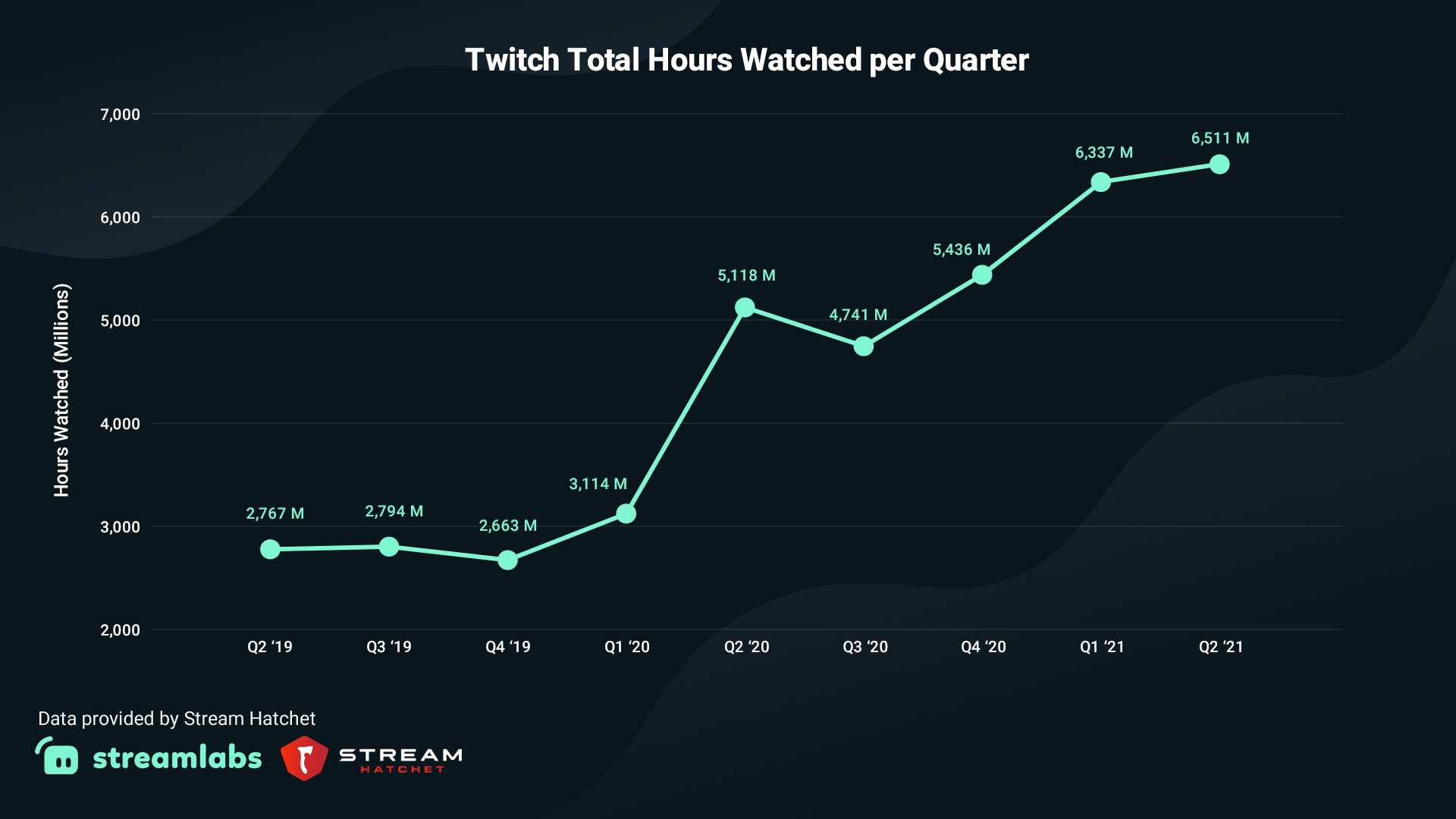 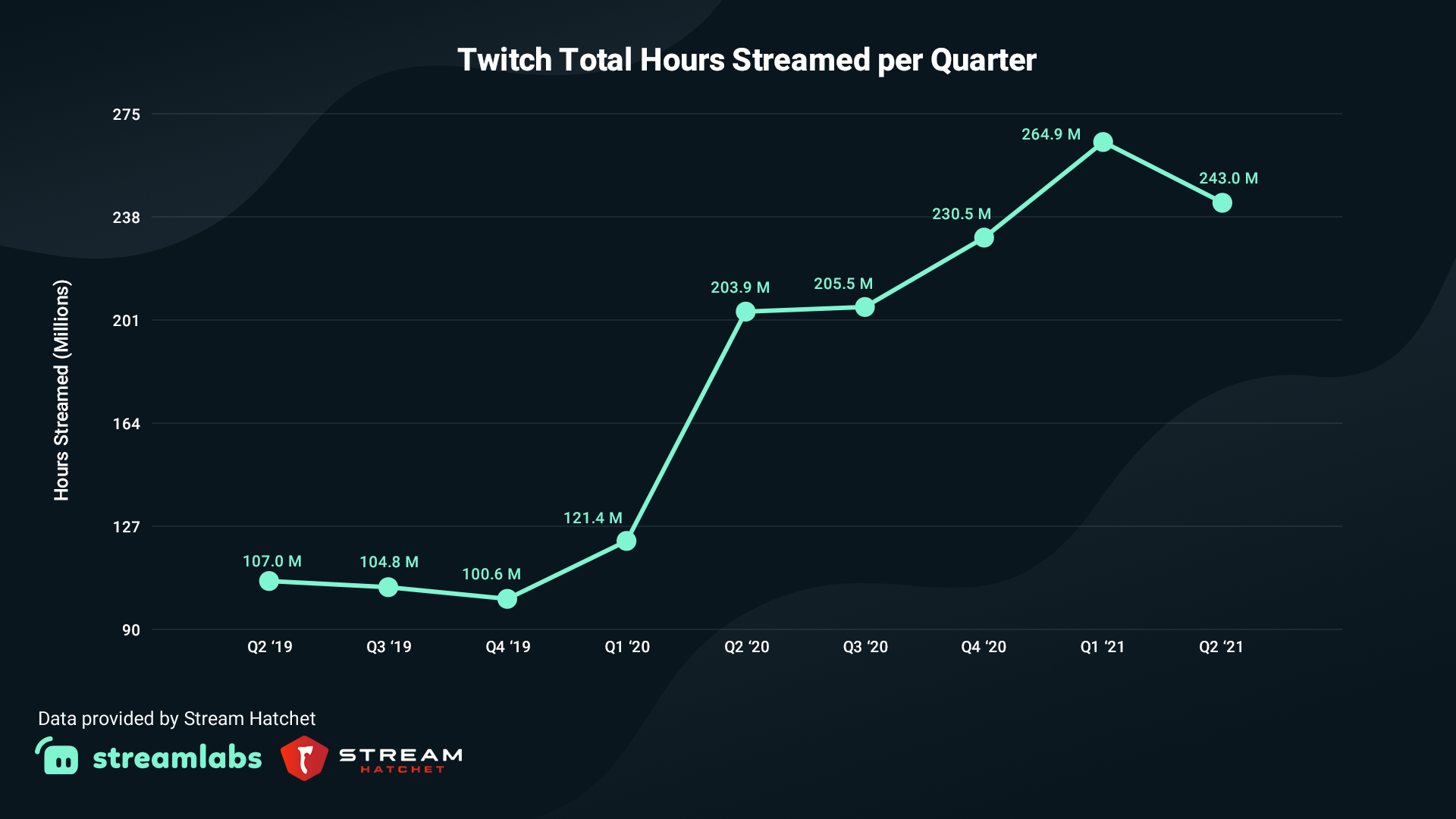 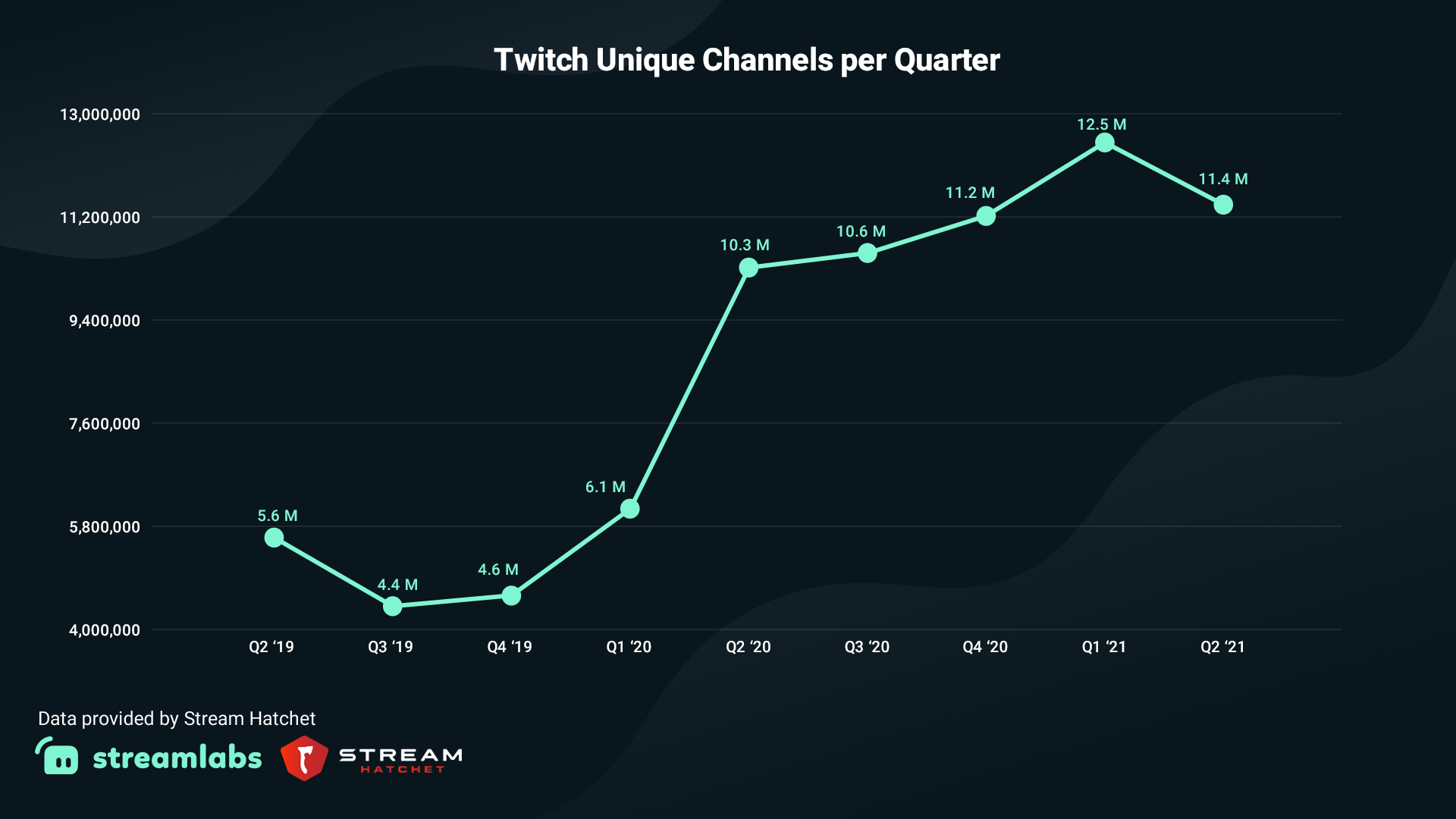 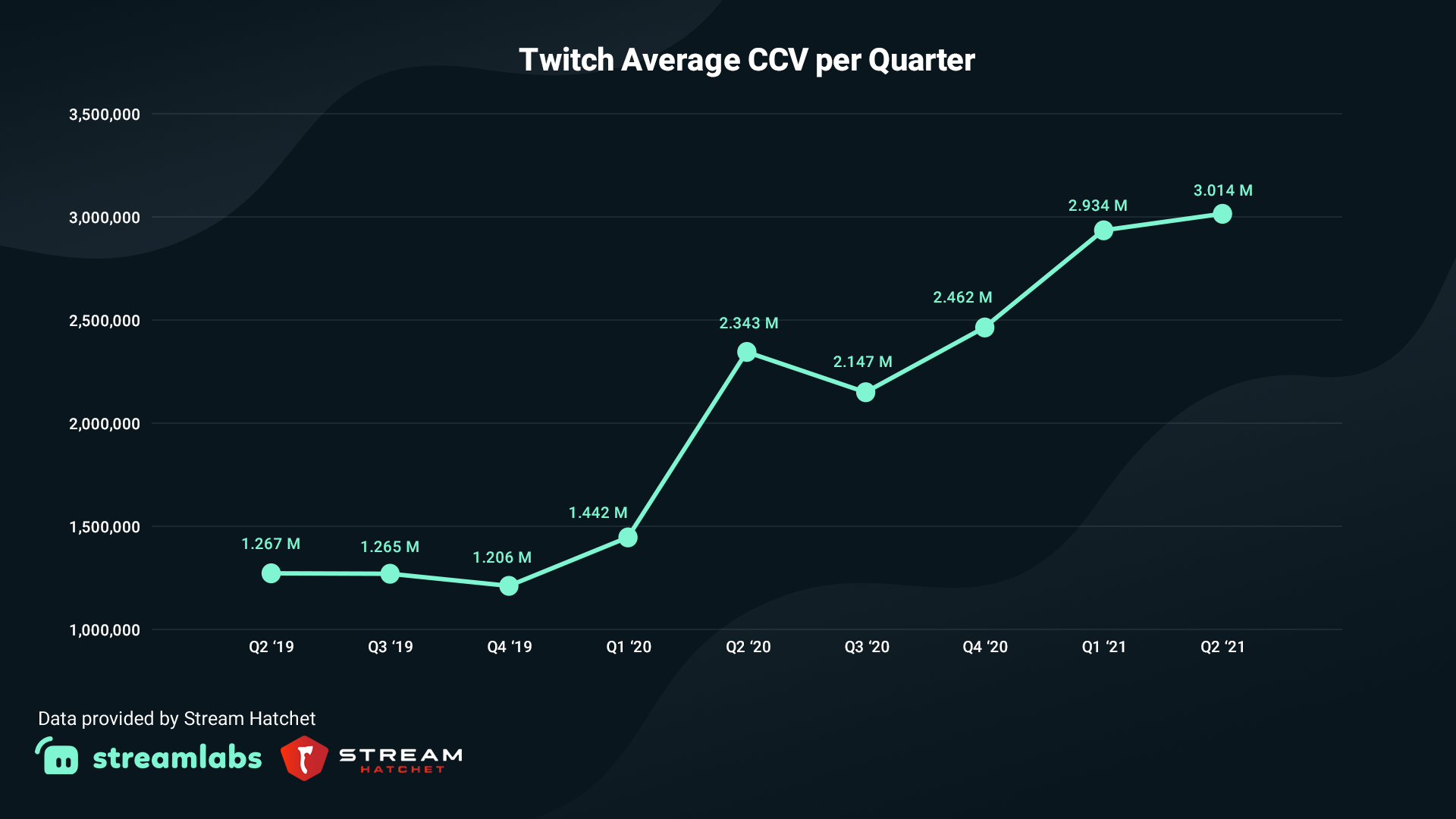 Viewership on YouTube Gaming appears to be returning to levels seen just before and during the first quarter of lockdowns. While there was a slight decrease in viewership hours this quarter, the rate of that decrease was much lower than the previous decrease. This indicates that viewership on the platform is showing signs of stabilizing as people resume their everyday lives following the pandemic. 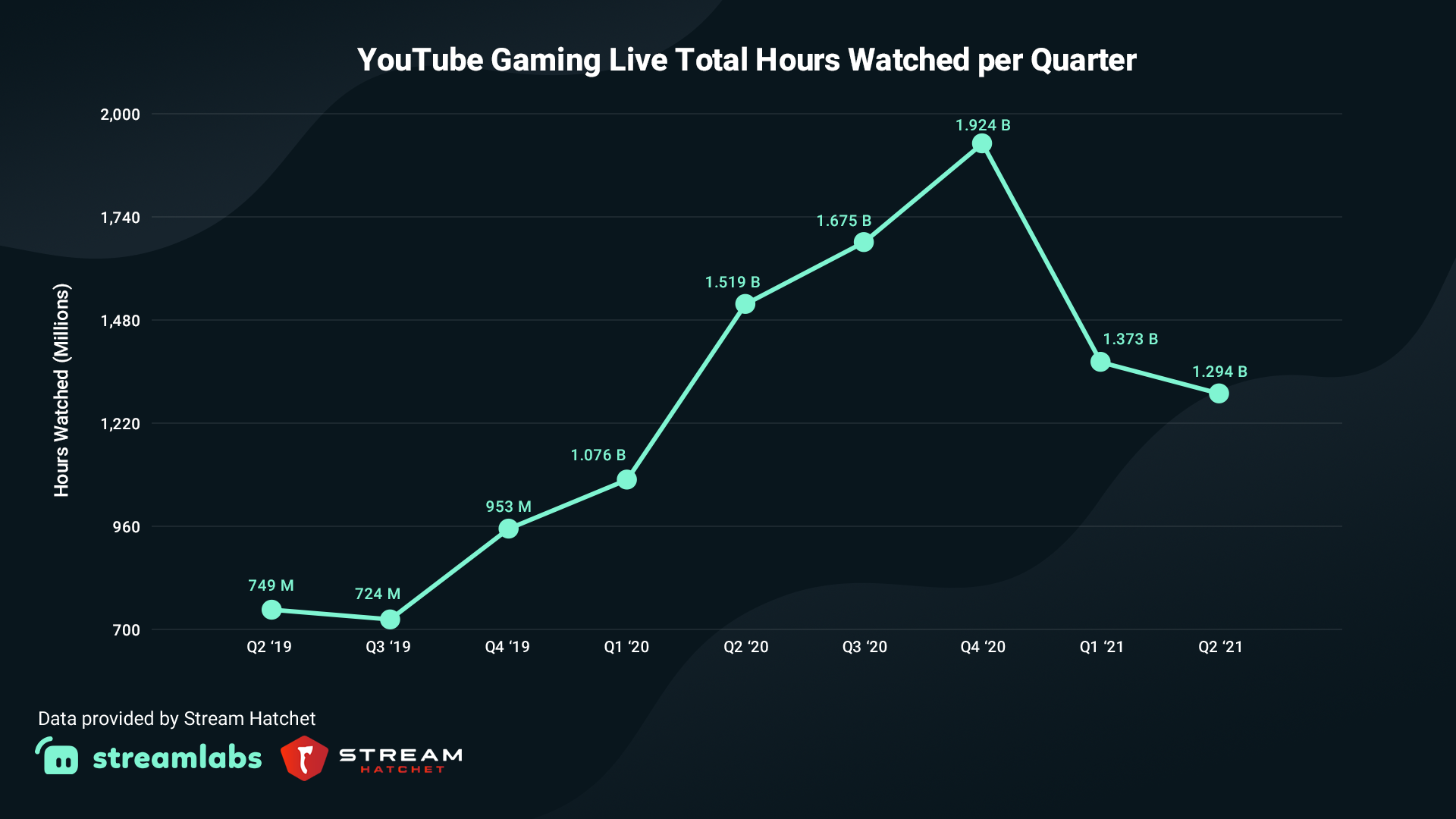 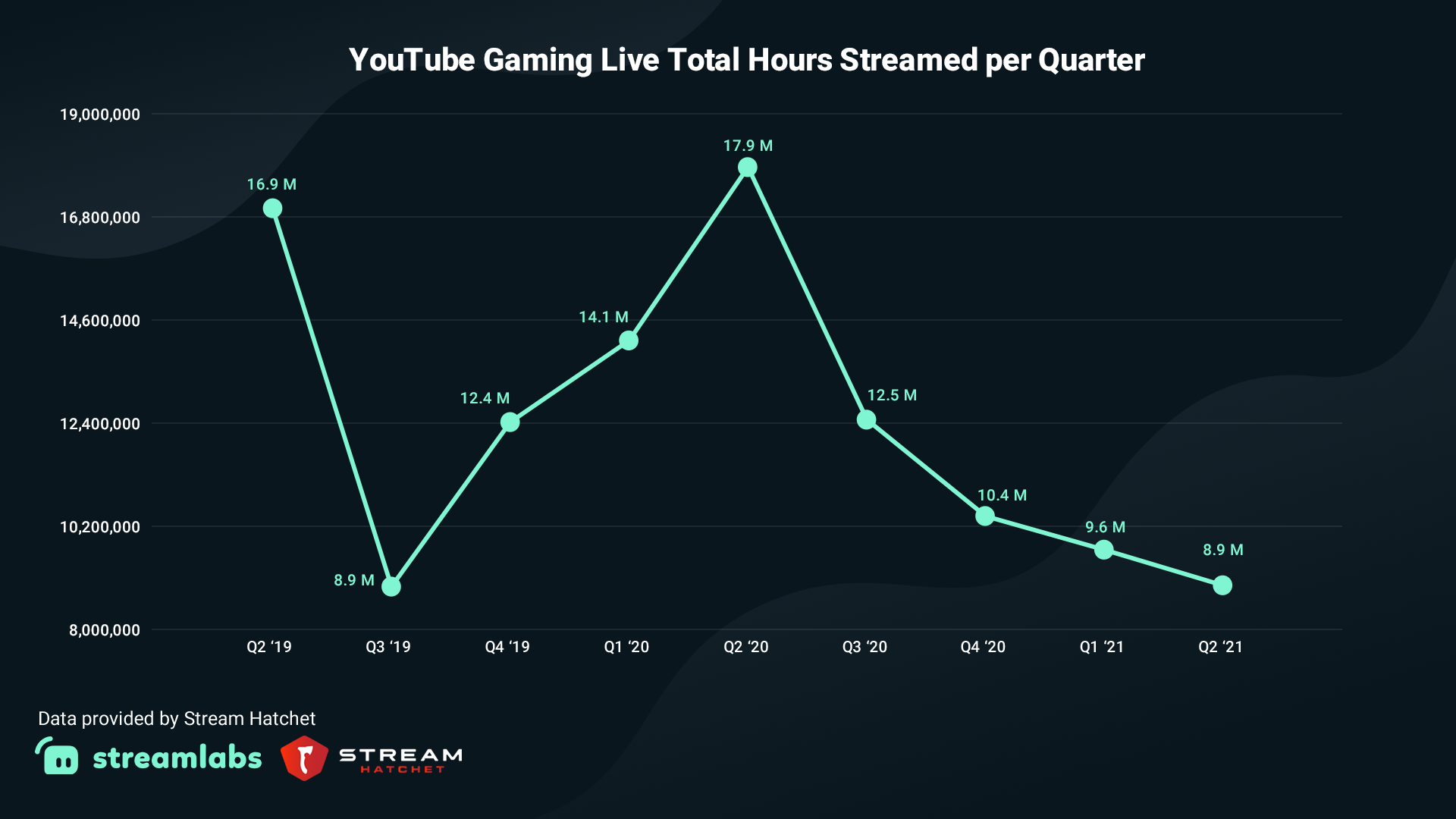 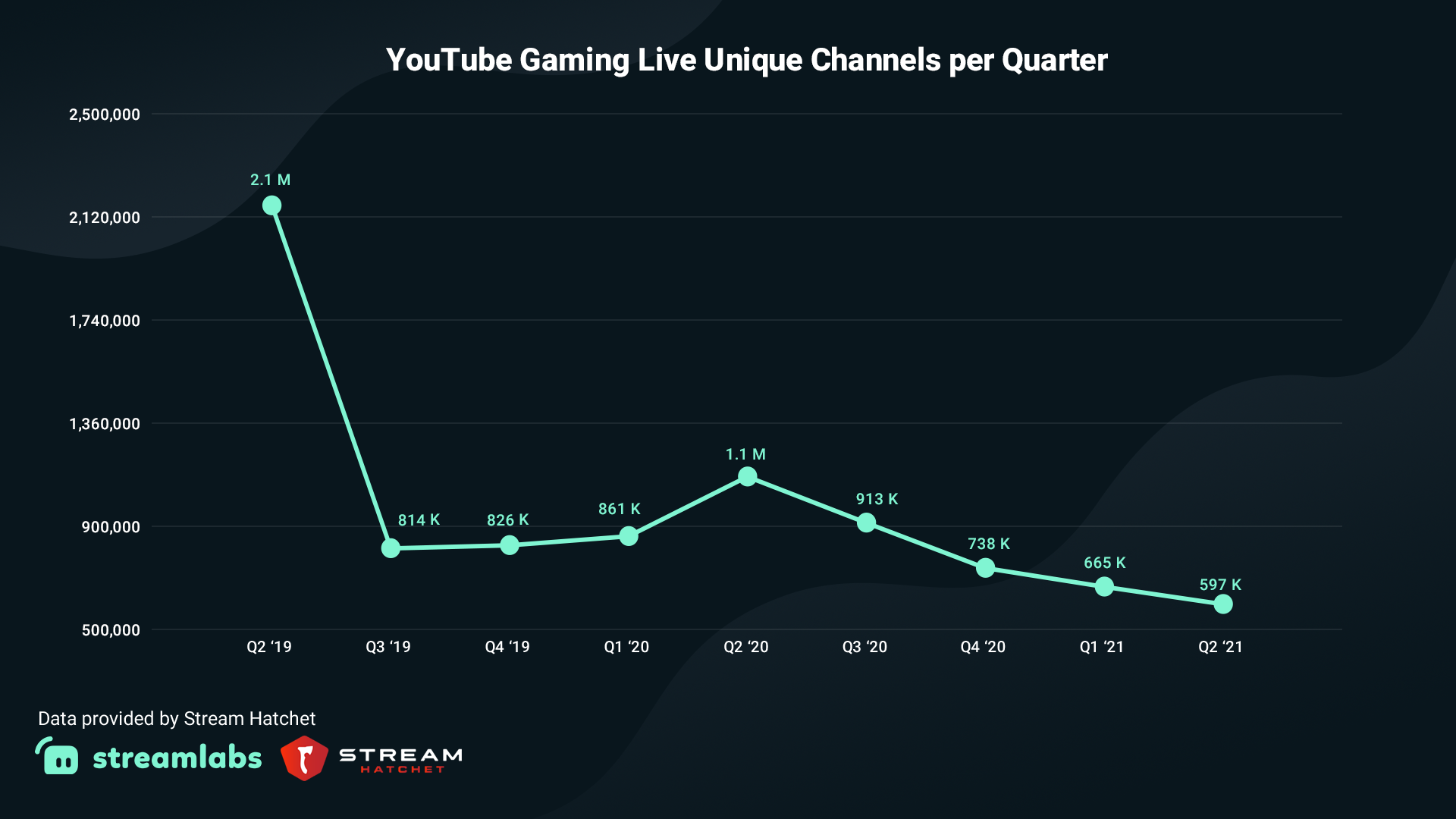 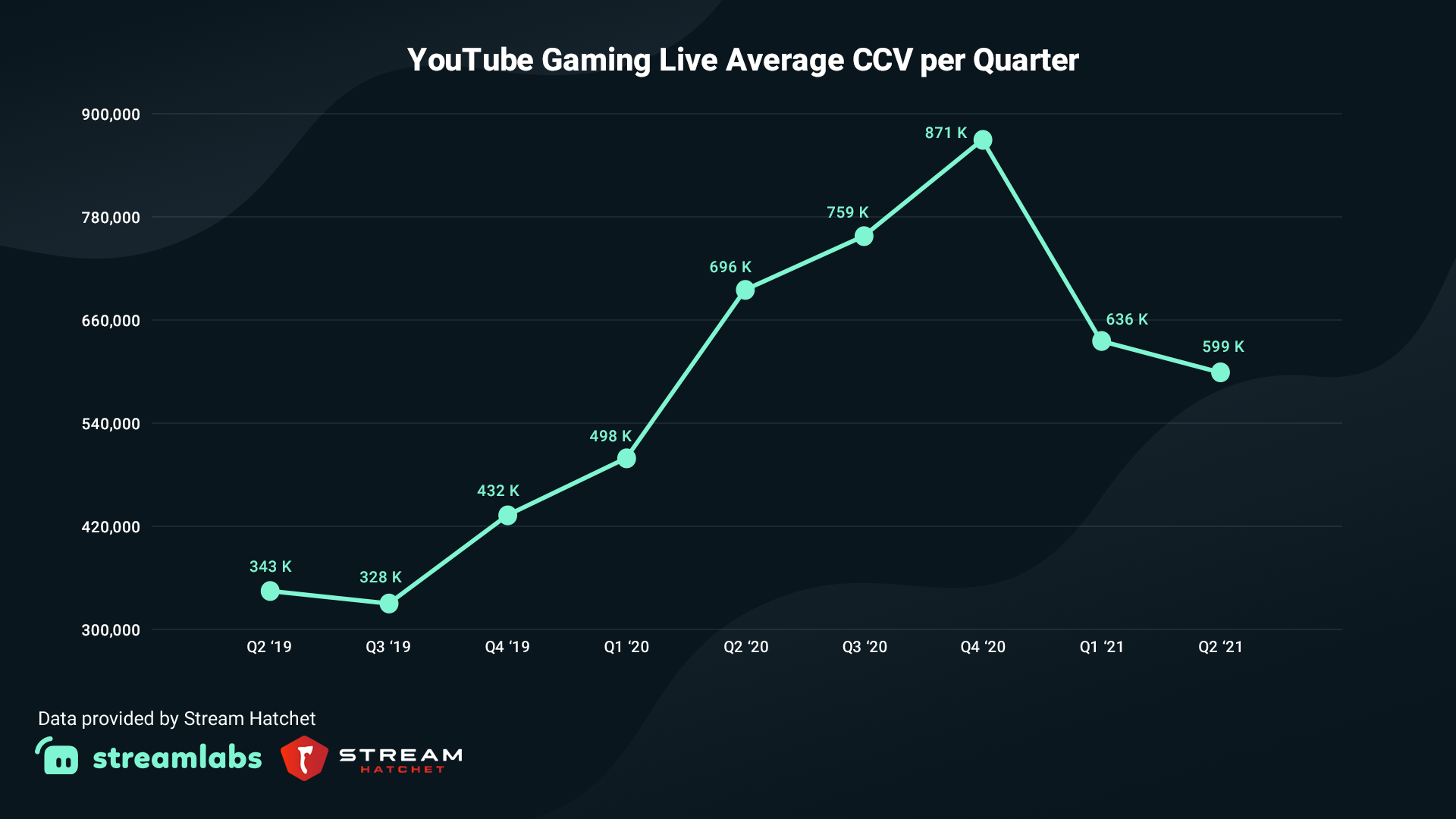 Facebook Gaming maintained its momentum after surpassing 1 billion hours watched for the first time in Q1. This quarter, it increased viewership by an additional 127 million hours, breaking its record for the third quarter in a row.

*Disclaimer* In Q4 2020, Facebook Gaming granted access to their API, which improved the discoverability of channels on their platform. 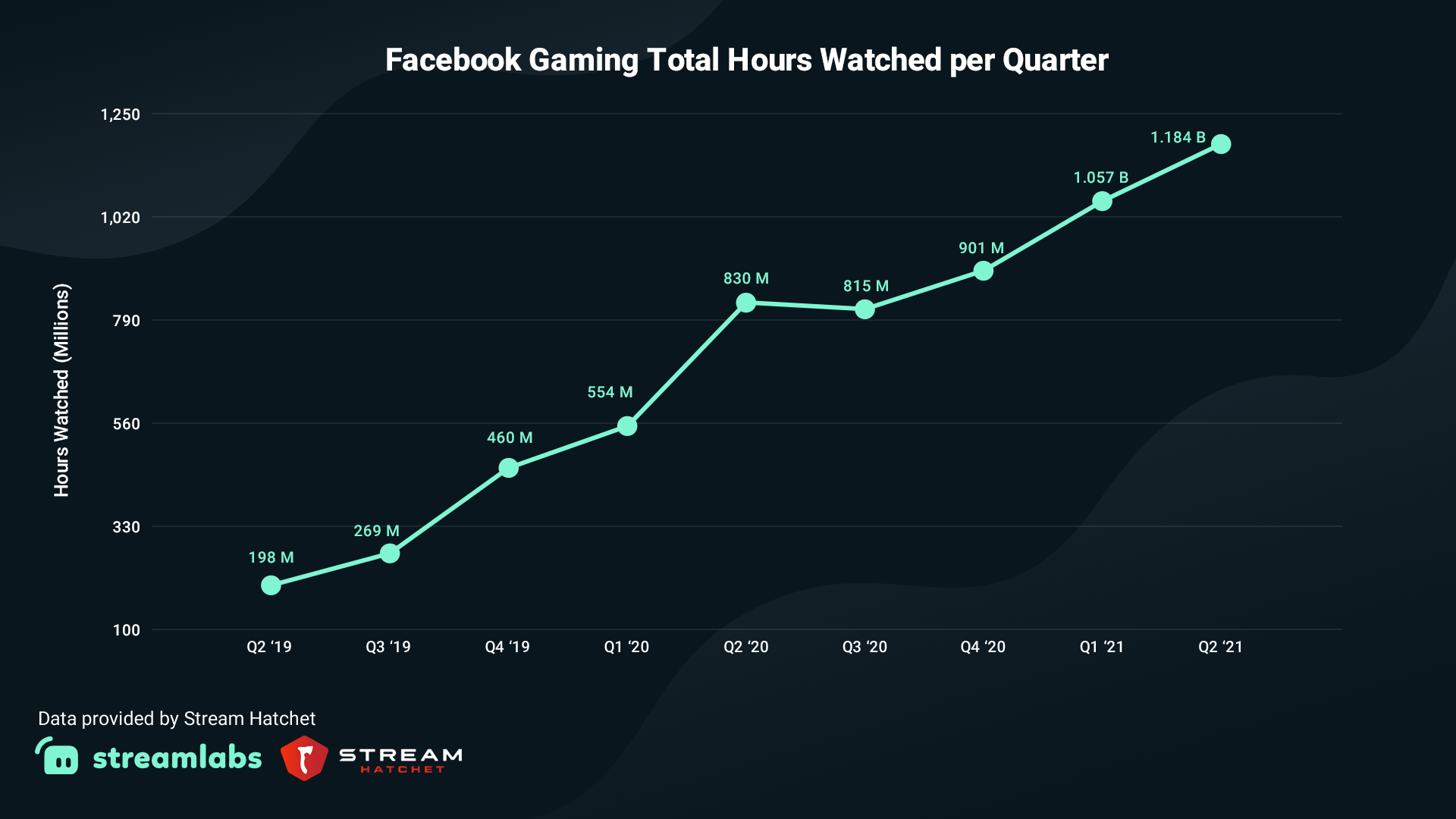 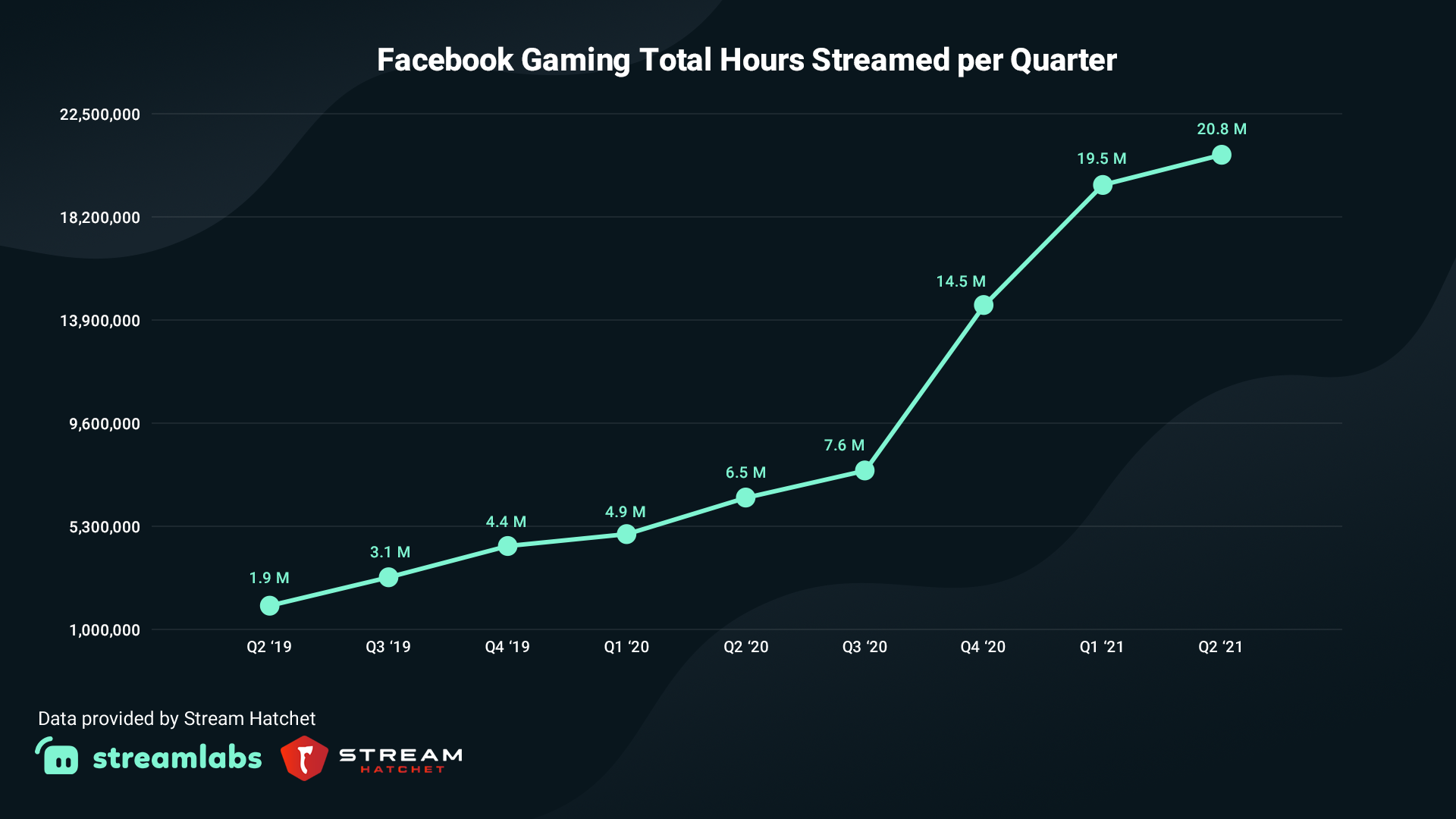 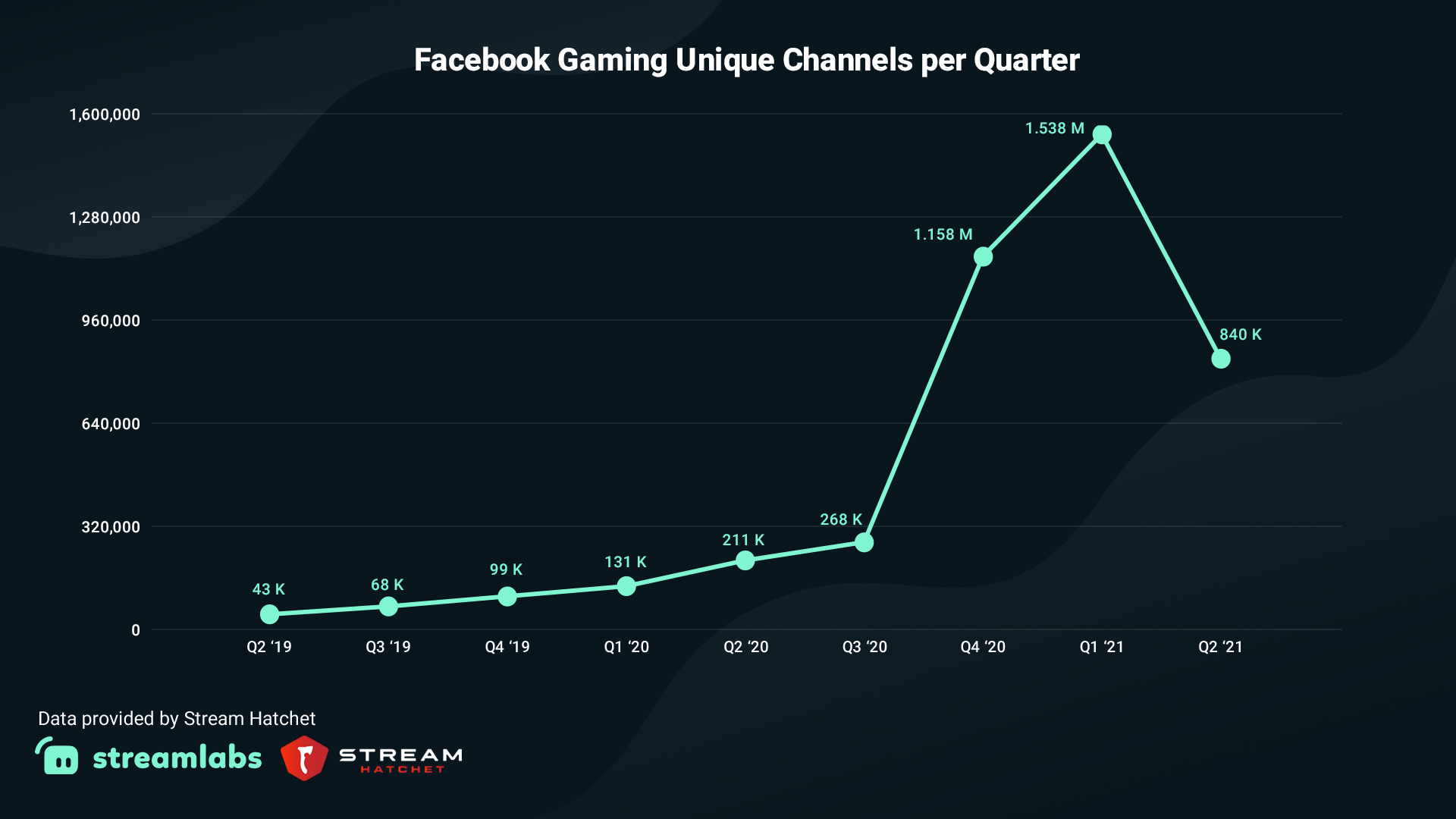 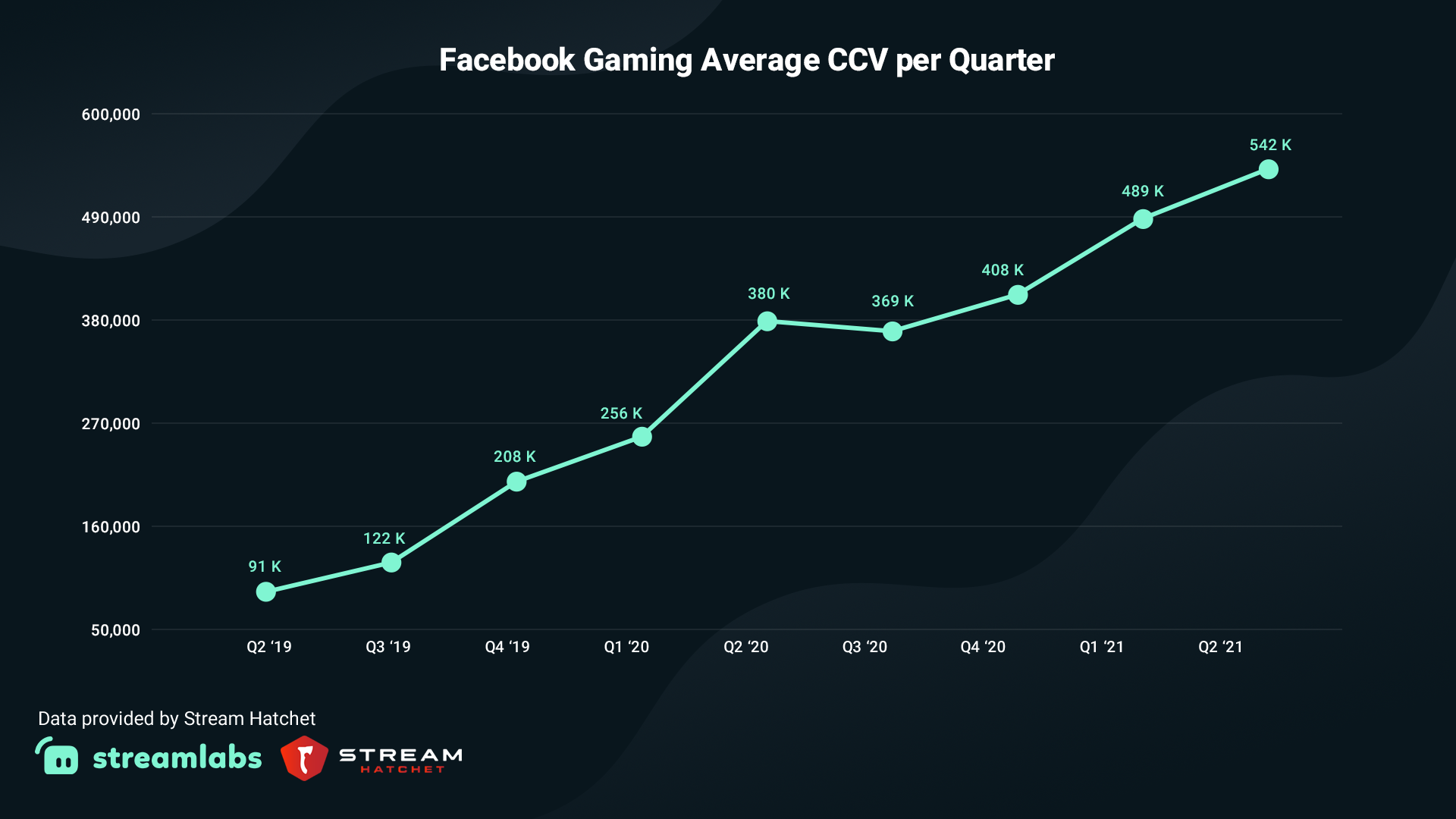 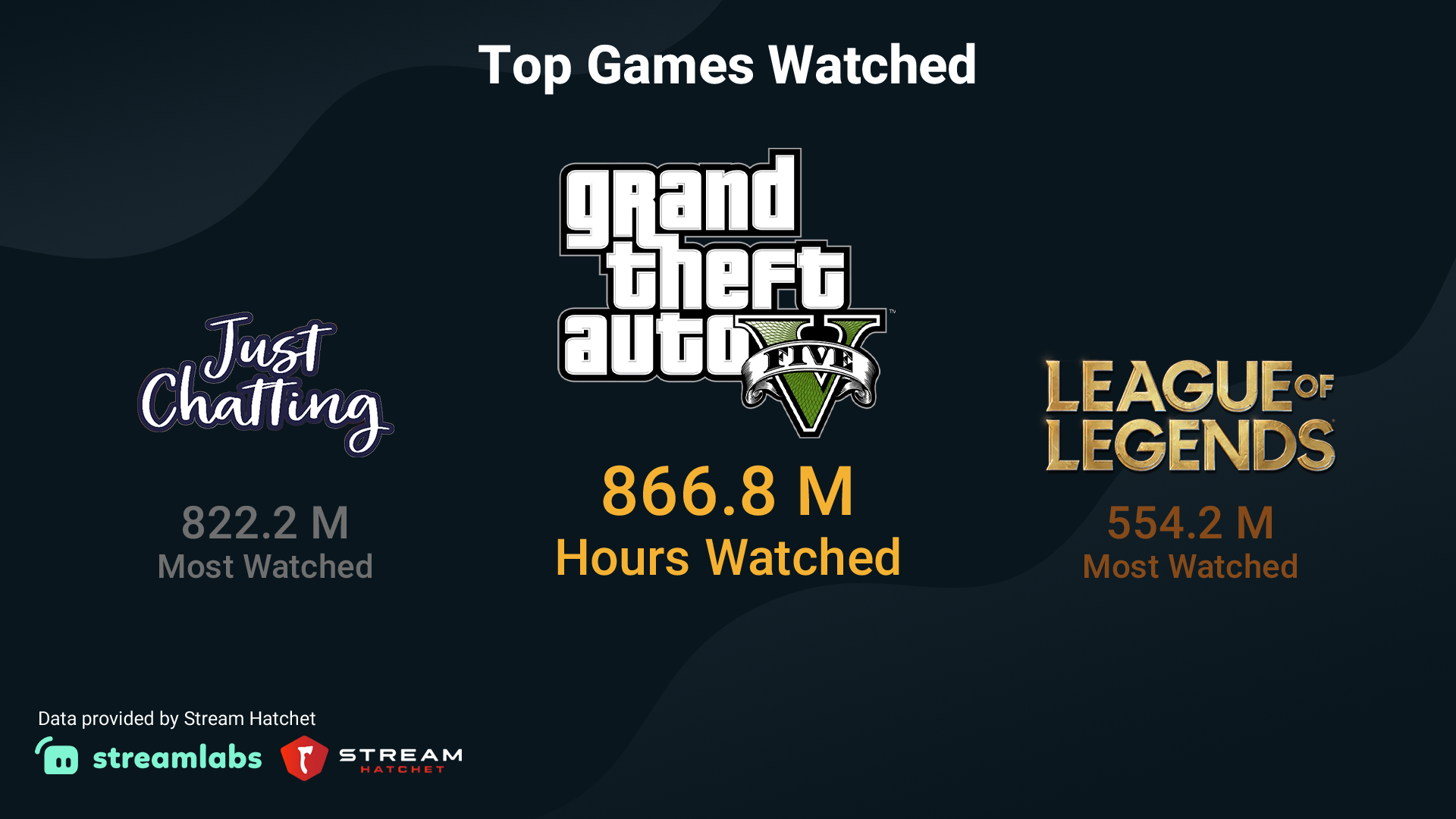 Grand Theft Auto was the most-watched category across all platforms, surpassing Just Chatting, which had held the top spot since the fourth quarter of 2020.

Check out our report to learn more about the top streamers among these categories: Top Live Streaming Content Creators in Q2 2021 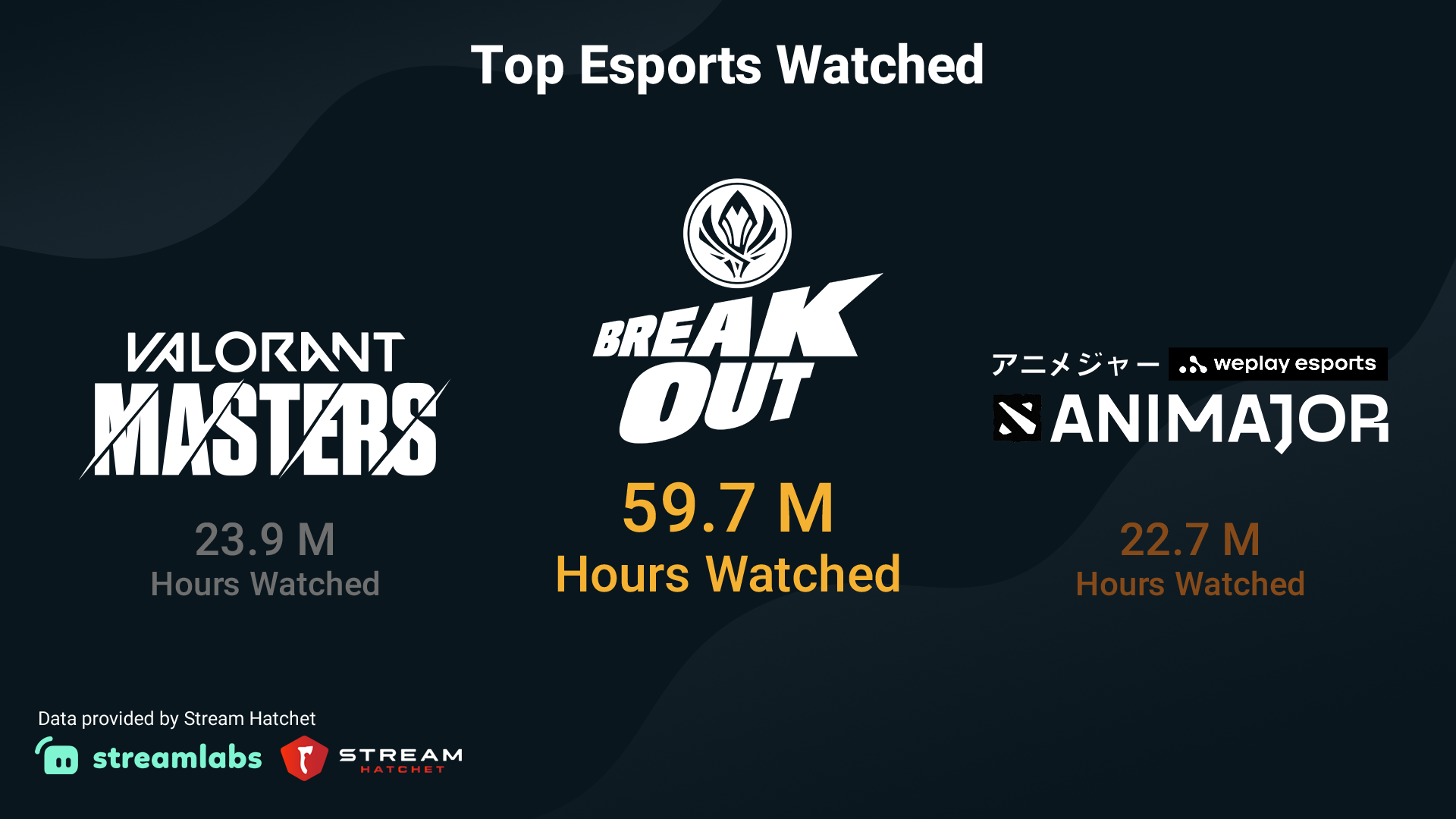 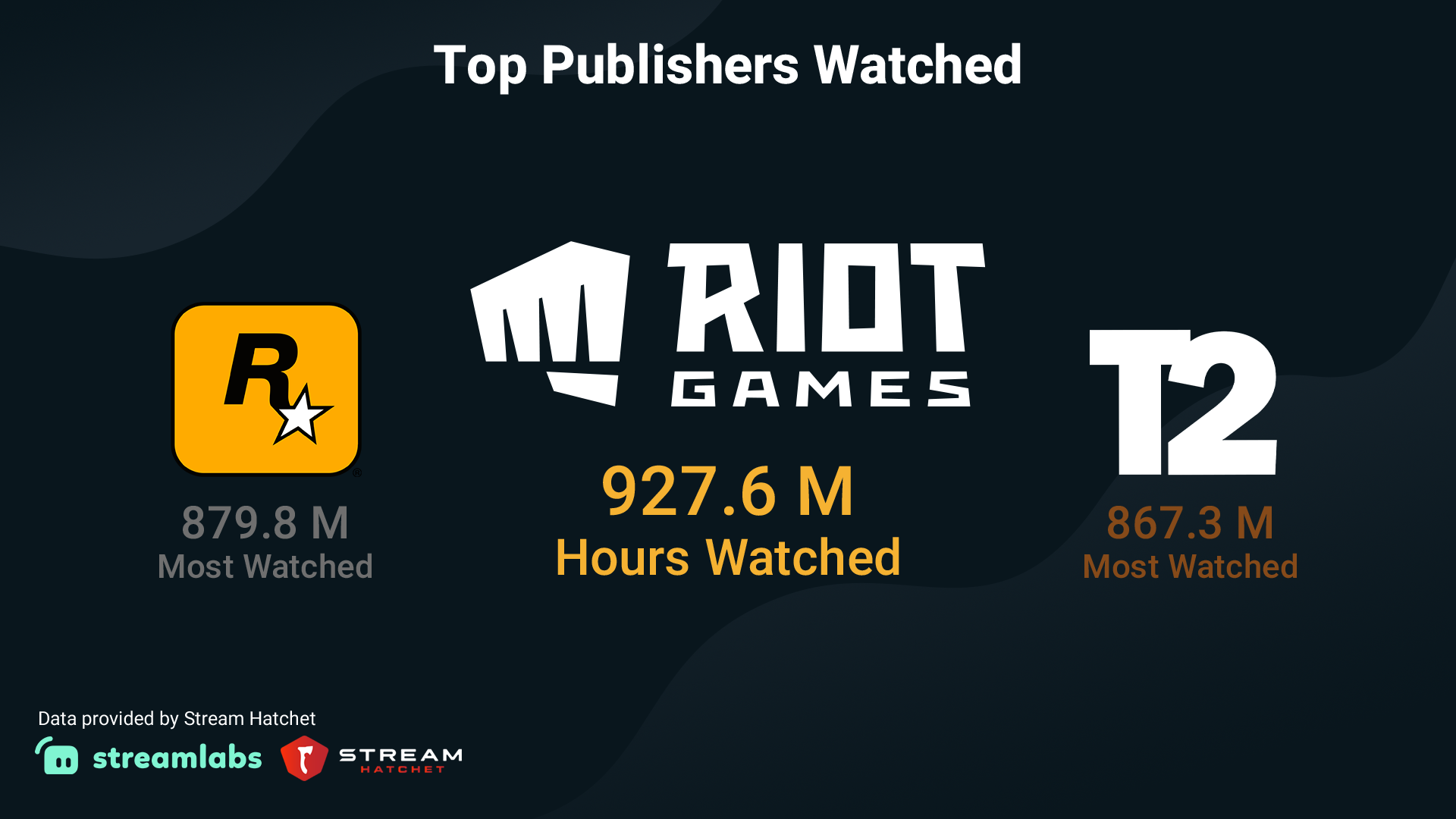 Viewers are consuming more live streaming content than ever before. While growth rates are beginning to slow in comparison to the peak of quarantine, it’s encouraging to see viewers returning to these platforms to watch content. On the other hand, it appears that the number of unique channels across all platforms is decreasing. As more people continue to resume their everyday lives, it remains to be seen whether this trend will continue in the coming quarter. Be sure to follow us here to stay up to date on the next live streaming quarterly report.

Founded in 2014, Streamlabs is a leading provider of live streaming tools and a brand of Logitech. Streamlabs offers dozens of features that professional live streamers use to broadcast, better engage with their fans, grow audiences, and improve monetization. Streamlabs is a brand of Logitech International. Founded in 1981, and headquartered in Lausanne, Switzerland, Logitech International is a Swiss public company listed on the SIX Swiss Exchange (LOGN) and on the Nasdaq Global Select Market (LOGI). For more information on Streamlabs please visit streamlabs.com or follow Streamlabs on Twitter, Facebook, Instagram, and Discord.

Stream Hatchet monitors live-streaming gaming viewer data across all platforms around the world and provides precise analysis for leading brands, esports teams, leagues, and sponsors. Stream Hatchet is a business unit within the larger Engine Media, a company focused on accelerating new, live, immersive esports and interactive gaming experiences for consumers through its partnerships with traditional and emerging media companies. The company is traded publicly under the ticker symbol (TSX-V: GAME) (OTCQB: MLLLF).